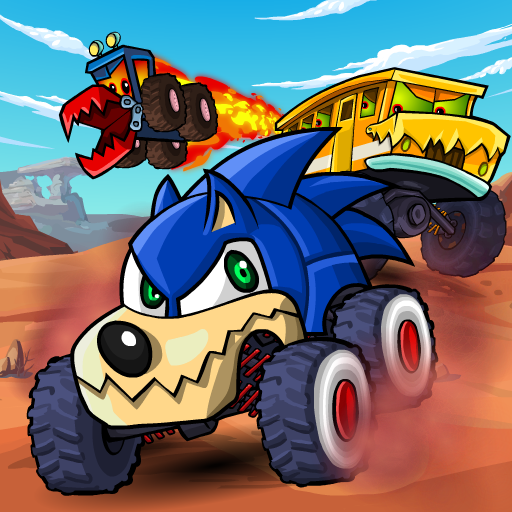 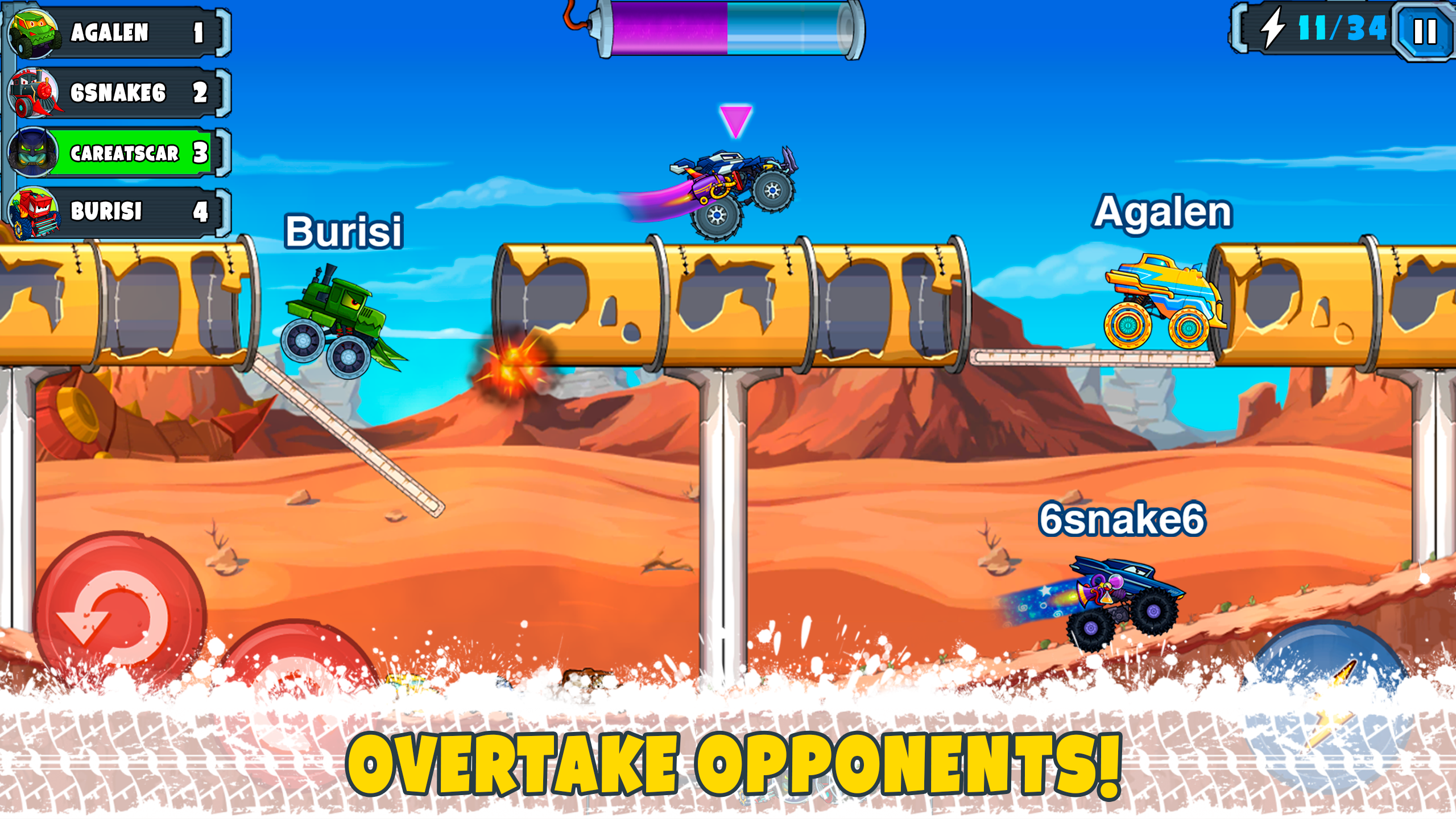 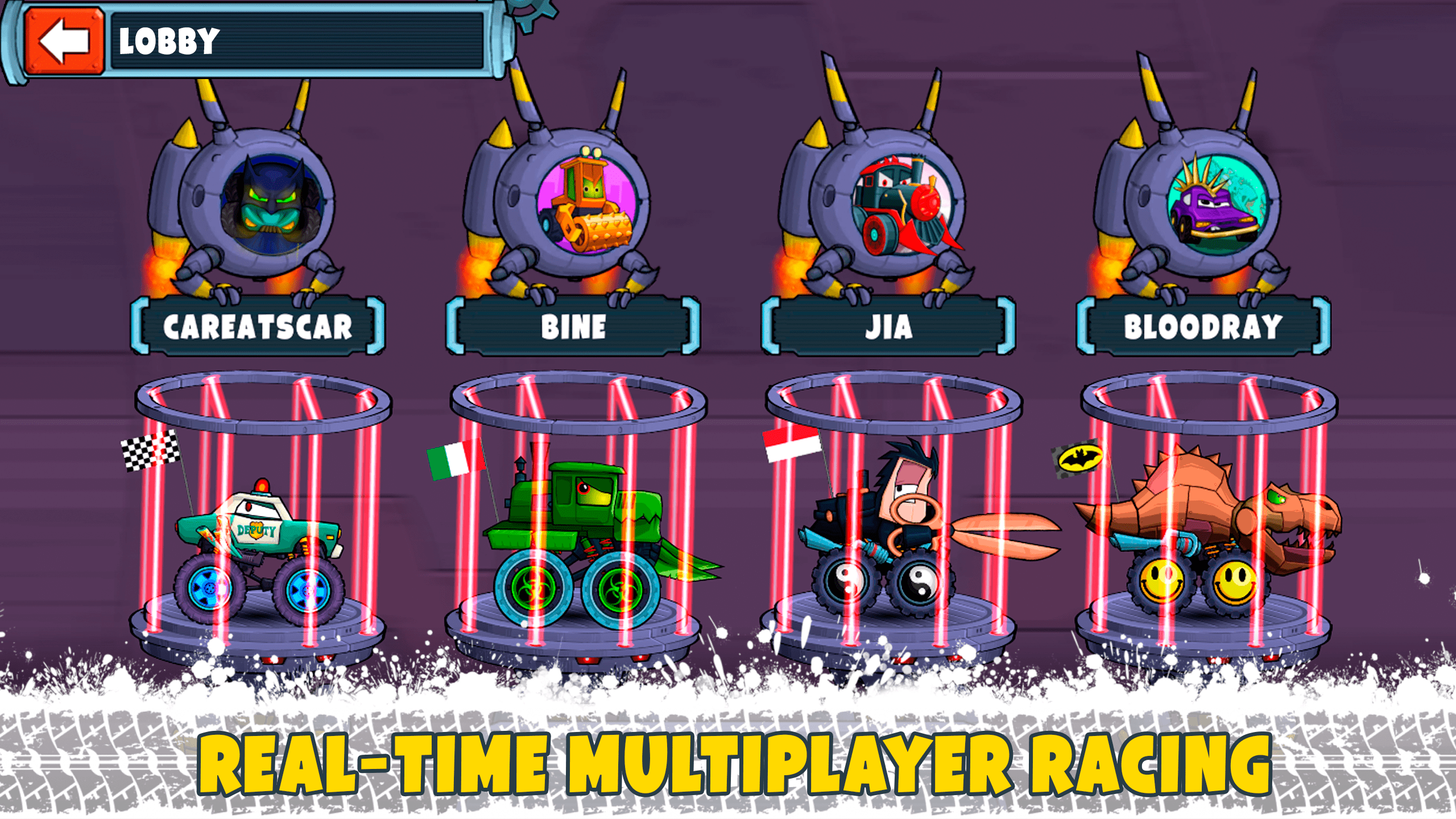 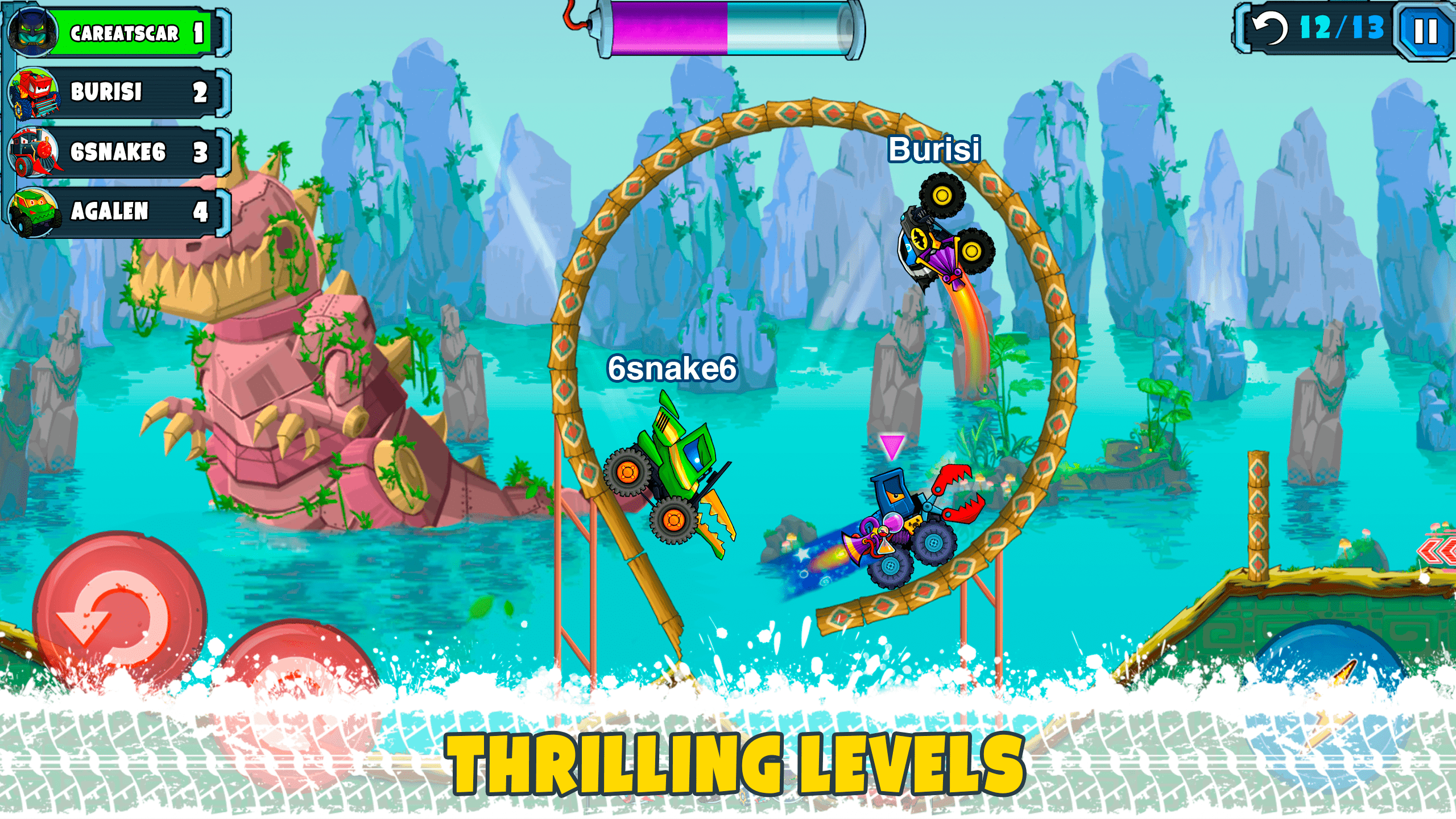 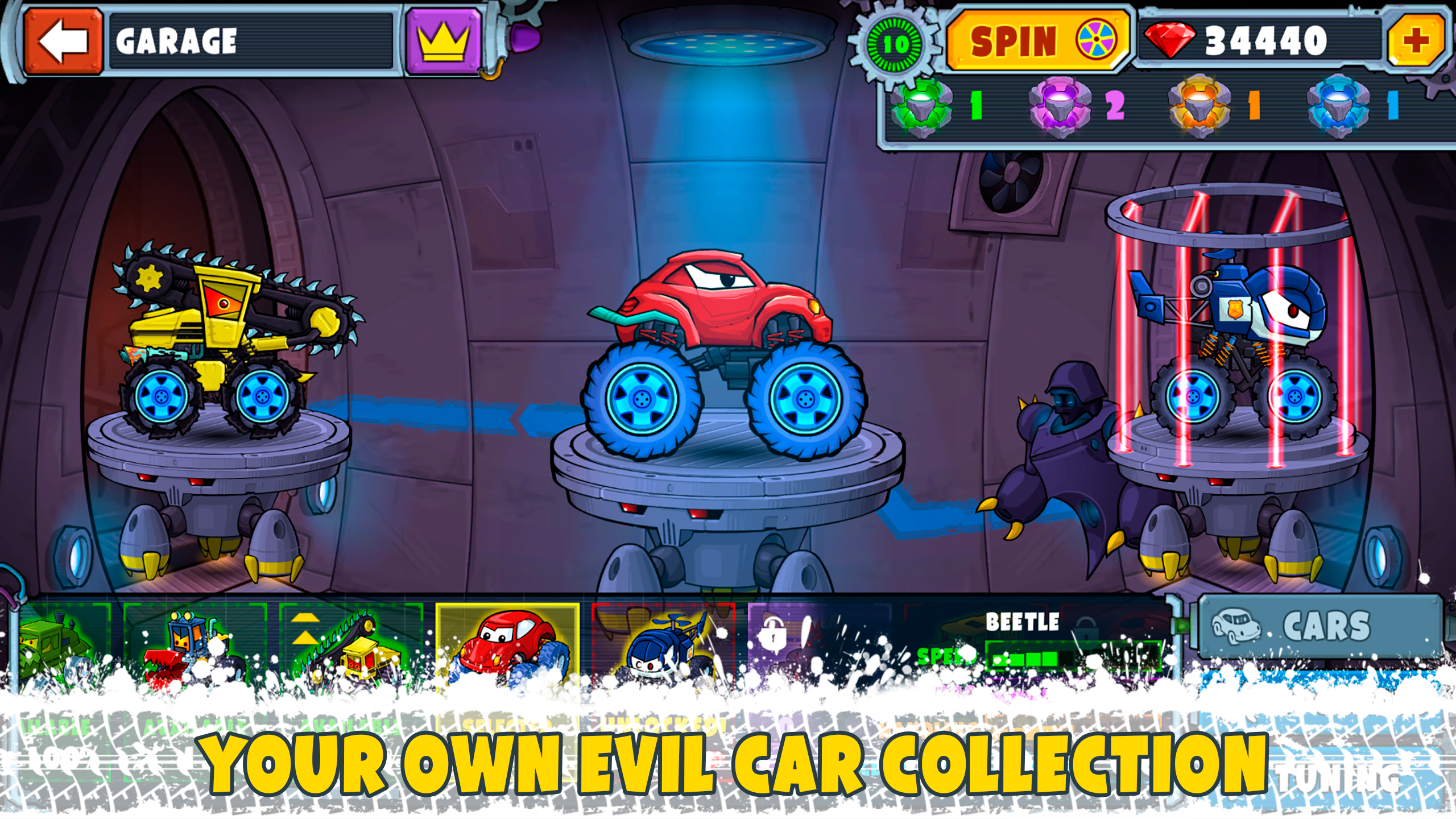 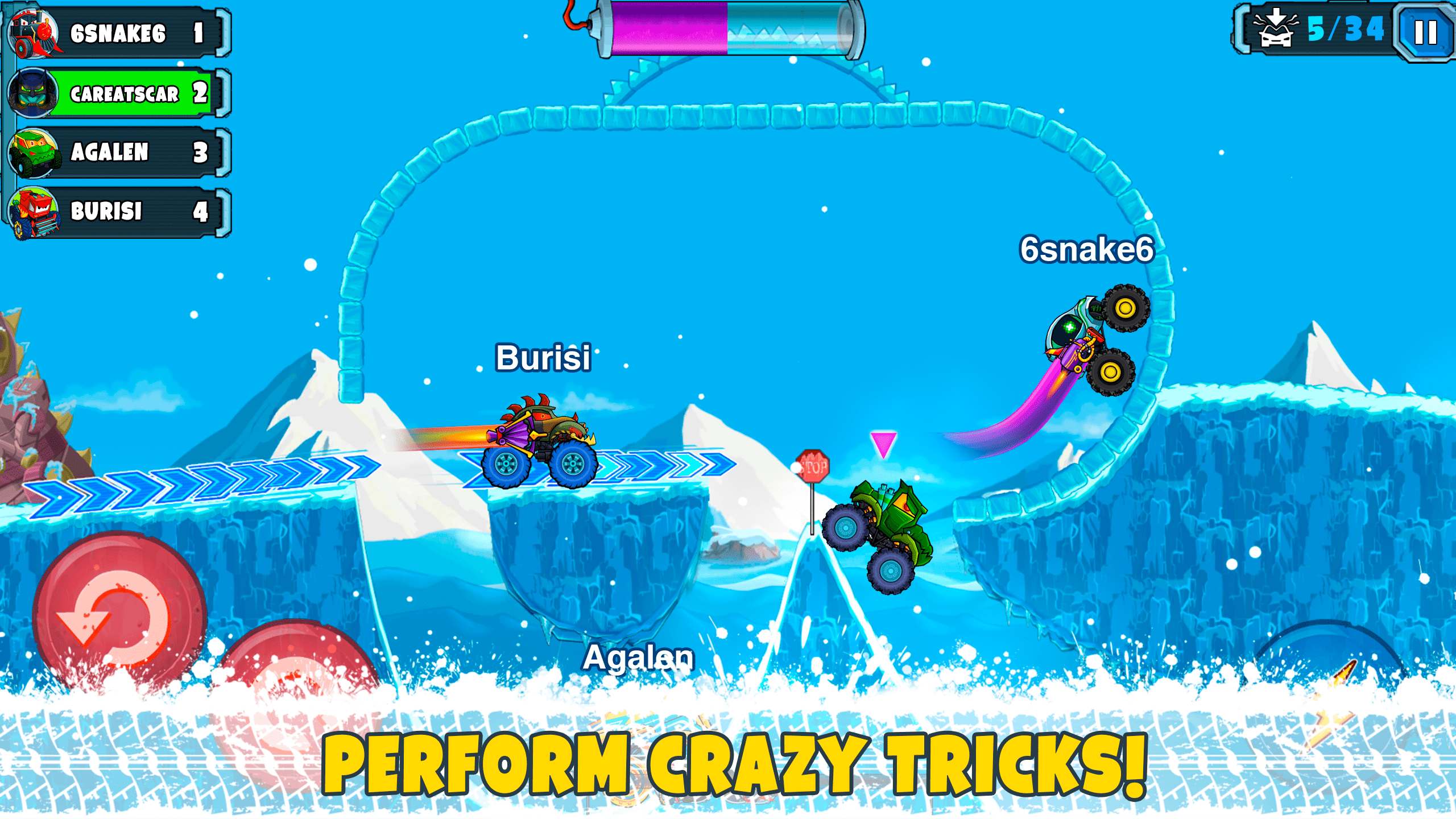 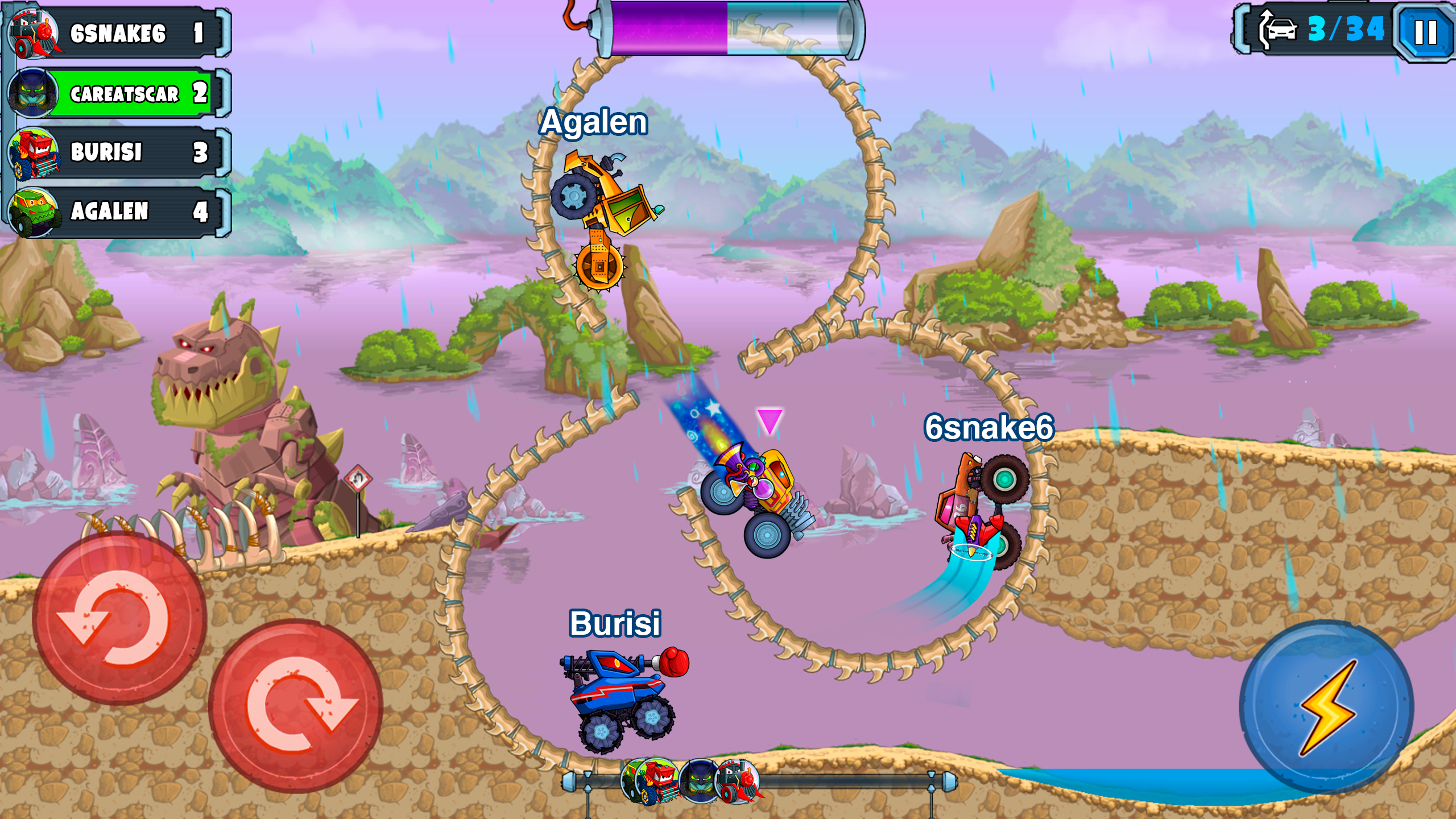 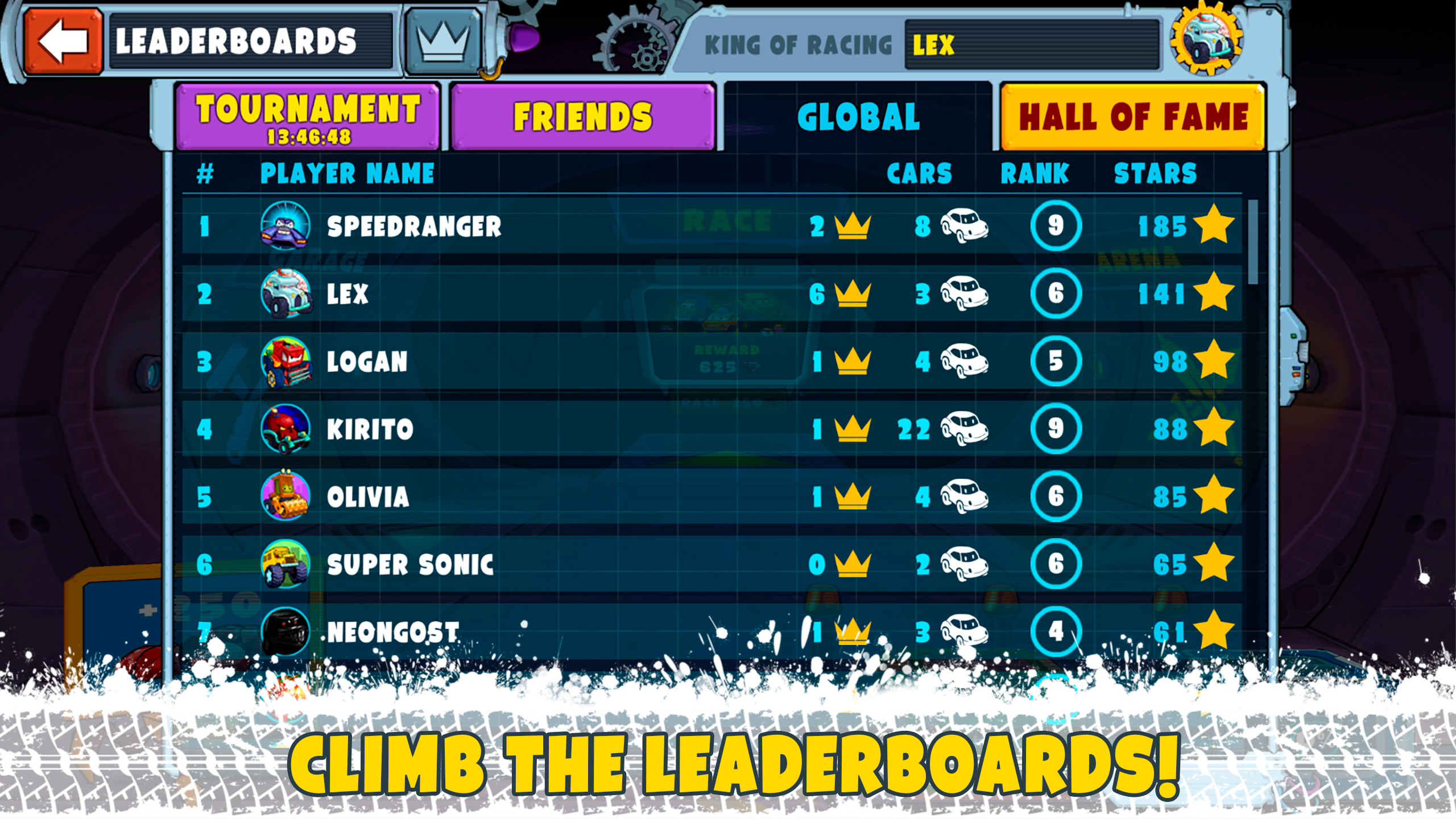 Racing is all about adrenaline, excitement, and speed! Looking for a driving game to challenge friends? Or to destroy opponents in a crazy PVP real-time game on the racetrack? Be the first road warrior to arrive at the finish line and climb the world leaderboards! Legendary Car Eats Car game is coming back! Now the extreme arcade racing is based on online multiplayer mode! Team up with friends and compete against rivals together! Car Eats Car Multiplayer Racing monster truck game is designed for fans of extreme driving, cartoon characters and comics.

CHALLENGE YOURSELF IN CRAZY RACES!
Take part in extreme races on various tracks against three rivals in a real-time mode with new Car Eats Car game! Drive a car in different locations: hot desert, snowy Arctic Circle, or the underwater world. Overtake competitors by coming to the finish line first! The cars of rivals would inevitably get in the way. Burn rubber and perform various killing maneuvers: jumps, tricks and coups, and land well. Defy gravity rules, take off from a hill, do backflips, and rush like a rocket through the crazy loops. The tricks replenish your car’s turbo supplies for acceleration. Boost your performance!

CUSTOMIZE YOUR MONSTER TRUCK!
Use rubies to modify your car with some crazy upgrades (speed, turbo, control, acceleration) to ensure that you keep on ruling the track in Car Eats Car game. Pick up the look of avatars, skins, flags, disks, and turbo effects. Or buy the car from the next, more advanced league! More than 20 trucks available! Put the flag of your country or your own unique banner on them! Show everyone who's number one!

CREATE YOUR OWN COLLECTION OF EVIL CARS!
A huge dragon steals the cars and moves them into the space-based garage, where they are turned into monster trucks. Participate in survival real-time races with Beetlee, Locomachina, Gator, Smarty and other offroad legends that can be yours! Help your cars escape from the main villain, Carzilla! You can do it! Race, overtake, and win!

BEAT YOUR RIVALS!
Your rivals in real-time races are people from different countries. Achieve success with the help of crazy tricks - spin forward, backward, and use nitro acceleration! Progress from the Rookie multiplayer level to the race of Experts, then Masters and Aces! Beat your opponents mercilessly, collect rubies, accumulate wealth, and upgrade your monster racing cars like nobody else! Go through levels and become the only offroad legend in the world!

FAST AND FURIOUS FEATURES:
- Race against friends or random players in real-time!
- Compete against up to four players simultaneously!
- Participate in thrilling daily racing tournaments!
- Unlock 20+ cars and choose the best one for your playstyle!
- Create your own car using huge tuning stuff!
- Blast through 24 crazy tracks!
- Perform mind-blowing stunts while trying not to flip over!
- Climb the leaderboards and challenge the best players in the world!
- Earn awesome achievements!
- Unlock upgrades!
- Enjoy a well-developed story and catchy graphics!
- Test simple and intuitive controls!
- Watch cool special effects of explosions and collisions!

REIGN SUPREME!
With fierce competition, this race is on! The sequel of the legendary monster racing game is more dynamic than ever! Participate in real-time tournaments with players from different countries! Wake up your predatory instincts! Only the best drivers with baddest rides will stand a chance to win this epic multiplayer showdown! It doesn’t matter whether you’re a stunt driver or a drag racer! Are you the road warrior who will reign supreme? Drive all 20 cars, find and upgrade the most suitable auto-monster for yourself. A great timekiller for racing enthusiasts in an unusual fun design! Tired of racing in circles for the sake of racing? Plunge into a dangerous adventure of evil cars with Car Eats Car Multiplayer Racing!